​Ananda is a co-founder of Prismatic Flame. She began her fire journey in 2012 at the Red Lion Pub in Winter Park, FL. Since moving to Milwaukee in 2013 she has participated in several fire troupes. She is the Fire Safety Liaison of Prismatic Flame and works directly with the Milwaukee government and fire department to develop the fire safety standards for the troupe. 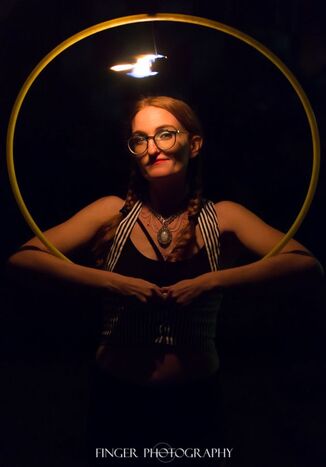 Sarah Sparkles is co-founder of Prismatic Flame. She has been been dancing with fire and teaching and performing hoop dance for ten years. Sarah is driven by a strong desire to collaborate and share with others, and loves creating and learning choreography with her troupemates. 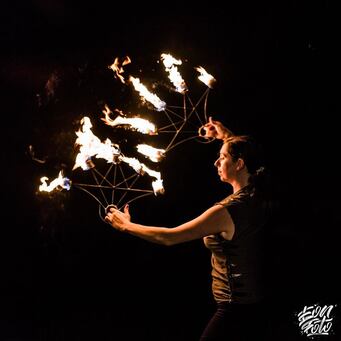 She has learned various styles of dance with a focus on tribal fusion belly dance. Since 2012, she has been combining dance and movement with the flow arts, seamlessly intertwining them into each appearance. Empowered through the art, she fuses technique with athleticism and control to deliver an uncommon style of performance. Her props include fans, rope dart, triads, hoop, fire eating, and palm torches.

She has always been passionate about dance and movement. Sarah Lynn brings a mesmerizing combination of prop manipulation fused with dance to her fire performance. Her dance background is predominately belly dance (tribal fusion, folk) with over 15 years of practice and instruction, but also includes hip hop and other styles. She has been studying flow arts for over 6 years and performs with fans, contact staff, double staff, poi and palm torches. She is a choreographer and member of Prismatic Flame. 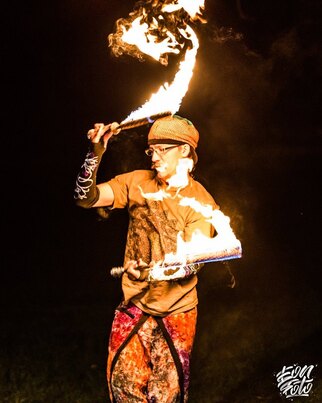 Skateboarder turned Flow Artist, he has been spinning since 2011, participating and supporting fire circles since 2012, and performing since 2014. 'I'm opening up, and hoping to share my experience with Flow on a more personable level.' 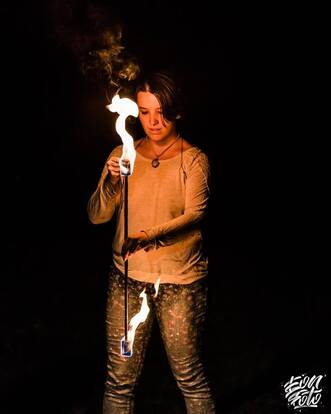 Sarah has been involved in the Flow Arts Community since 2011; first as a spectator, then as a safety around fire circles, finally as a Performer and participant Herself. As a member of the Performance troupe Prismatic Flame and the Community group Spinsconsin Sarah has been able to reach out more in regards to Performances as well as Teaching within the Flow community. She has always enjoyed watching and participating in fire circles and is excited to be able to aid in the Growth of the flow Community. Remember: There's always something new to learn, new to show, and to be shown. She wants people to succeed, and to learn ways to give their props new life.
​Fun fact time! Sarah is a Multi-prop spinner but if she were forced to choose just 3 props they would be Levi-Wand, Staff, and Fans. 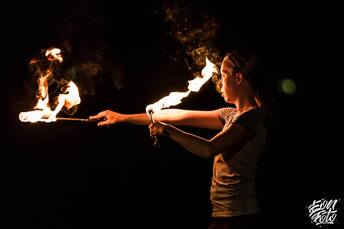 She started her flow journey in 2012 when she saw a woman selling shiny hula hoops at a local festival. It was then that she fell in love! Since then Katie has dabbled in a variety of circus and flow arts including hooping, fire eating, hand balancing, and juggling. Katie began eating fire in January of 2017. She enjoys the gasps from the audience as the flame gets extinguished in her mouth. As a self-proclaimed inversion junkie, she loves to be upside down and share her background in gymnastics and dance with everyone she meets. Katie truly loves to spin all the things and is inspired by prop manipulation of all kinds! 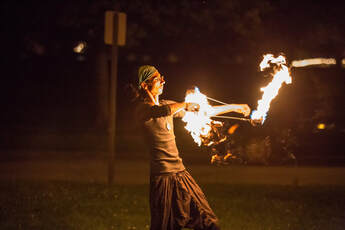 Born a wizard, raised as a ninja, he found himself as an artist. With a passion for all things beautiful, he uses artistic expression to better understand himself and relate to the world and people around him. His props include poi, contact staff, dragon staff, contact juggling, and rope dart. 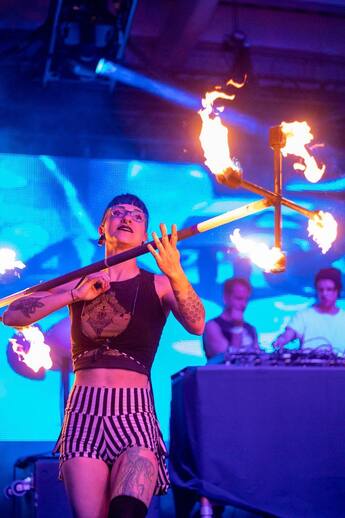 Her fire and flow arts journey began in 2018 with poi, but she then fell in love with dragon staff, levi wand and later, fans. Flow arts has helped her reconnect with her passion for dance and sharing that with the community. She hopes to continue to excel in multi props and one day be able to teach them to others.” 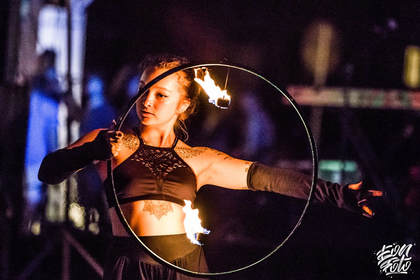 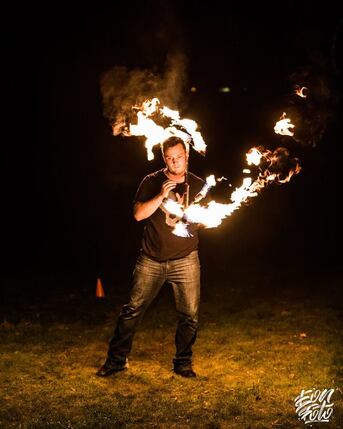 ​He is a life long Martial Artist with a background in Filipino Martial Arts, Kickboxing, and Brazilian Jiujitsu. Translating martial art skills into fire performance has always been a creative outlet for him, and he enjoys sharing the art through performance and teaching. He's never seen a wick that's too big to spin.